Passy in Bulgaria Looks for Descendants of Isaac Passy (1910-1943): A Bulgarian Jew Exterminated in a Nazi Concentration Camp 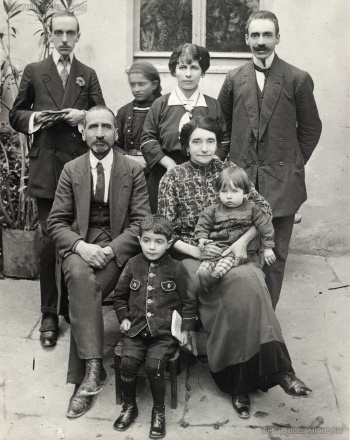 Isaac Nissim Passy (28 June 1910, Plovdiv-1943?) oldest child of Nissim Passy, emigrated to Palestine, and then to France. He was sent from Drancy camp in France to Sobibor on March 23, 1943 on expedition # 52. This information is based on the list of Jews deported to the camps from the memorial book to the Jews deported from France (by Serge and Beate Klarsfeld). According to their research no one survived from this particular transfer. Isaac and a Frenchwoman in Southern France have one daughter - Sultana, who remained in France.

On this picture are: The Jewish family Isaac and Donuga Passy (sitting), their two standing sons Solomon (left, grandfather of Mr. Passy) and Nissim with his wife Sultana and their children Isaac and Sophy, Plovdiv, Bulgaria, the beginning of the XX century.